The New Jersey statute that defines assault is N.J.S. 2C:12-1. In that statute are over twenty distinct ways in which a person can be guilty of assault.

New Jersey classifies assaults as either simple assaults or aggravated assaults. Factors that influence the particular variety of aggravated assault include the seriousness of the injury; whether a weapon was involved; the mental state of the actor, that is, whether the was act committed purposely,

knowingly, or recklessly; and the status of the victim. Status factors include whether the victim was a law enforcement officer, a fireman, an EMS provider, a school official, a judge; or whether the incident occurred at a sports event; and on and on and on. Any assault other than a “simple assault” is an “aggravated assault.” New Jersey defines some activities to be simple assaults and some to be aggravated assaults even when no injury at all occurred. No-injury assaults, both simple and aggravated, can occur even when no injury was ever intended. 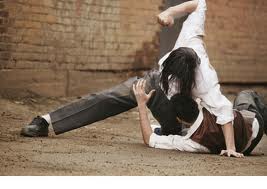 all the types of aggravated assault would be a monstrous task. Moreover, were all the different types included, this page would likely put most readers to sleep. Accordingly, our discussion of aggravated assault limits itself to just the “traditional” type of aggravated assault, namely serious bodily injury aggravated assault. We emphasize, however, that ALL assault charges are serious. In that regard, we will also discuss simple assaults later on. We provide the full New Jersey assault statute elsewhere. Sexual assault is on a separate page.

“Serious bodily injury” means bodily injury which creates a substantial risk of death or which causes serious permanent disfigurement, or protracted loss or impairment of the function of any bodily member or organ.

In determining whether a defendant acted purposely or knowingly or acted recklessly under circumstances manifesting extreme indifference to the value of human life, a jury may consider the nature of the act itself and the severity of the resulting injuries. Note that the actual victim may be someone other than the intended victim. It does not matter. Also, if the defendant attempted to cause serious bodily injury, it does not matter whether such injury actually resulted.

The first thing to understand is that there is nothing “simple” about simple assault. For starters, its legal consequences, both immediate and long-term, are vastly disproportionate to its understated label. Secondly, the law itself concerning simple assault (as in most criminal matters) is deceptively complex.

New Jersey specifies three ways that a person can commit a simple assault. These ways can be found at N.J.S. 2C:12-1a. They are: Part of what makes the law of “simple assault” complex is that many of the terms in its definition are, themselves, defined elsewhere. Thus, one must look elsewhere to see exactly how New Jersey defines such terms as “attempt,” “physical menace,” “purposely,” “knowingly,” “recklessly,” “negligently,” “bodily injury,” “serious bodily injury,” “imminent,” and ”deadly weapon.” Many of these definitions are very different from the way the terms are used in everyday language. Sometimes the differences are subtle. A skilled lawyer can find and use these subtleties, when they exist.

Convictions for simple assault expose a person to a jail term of six months, and a fine of $1,000.00, plus other statutory assessments. Where bodily injury or other expenses to the victim resulted, the court will order restitution. And, very importantly, the conviction remains on one's record for employers, potential employers, potential landlords, licensing agencies and, really, anyone who cares to look, to see. One's ability to get or keep a firearms permit will be jeopardized. The ability of non-citizens to remain in the country, or reenter the country, or obtain citizenship, can be seriously affected, sometimes beyond repair.

Persons charged in New Jersey with any type of assault should consult with an experienced New Jersey criminal defense lawyer immediately. Defense of assault cases often benefits from immediate investigation. This immediate investigation helps to identify and seek cooperation from witnesses, and to preserve evidence. These steps can be crucial for effective defense efforts. Criminal Lawyers in New Jersey know what kinds of witnesses and evidence can help the defense.

Allan Marain is a New Jersey assault lawyer. He has forty-five years experience. He has successfully represented numerous New Jersey persons charged with simple assault and aggravated assault. He is available to discuss charges against you in a no-obligation one on one conference. Call him!