Generally, two kinds of acts can constitute bribery. The first kind is conferring, or offering to confer, any benefit to another in return for which the receiver of the benefit will then violate a duty of fidelity to a third party. The second type, of course, is soliciting, accepting, or agreeing to accept the benefit just described. The New Jersey criminal code discusses bribes in two separate places. The first place treats commercial bribes. The second place treats bribes in official or political matters. We discuss both types on this page.

In the federal sphere, Congress considers bribes mostly in Title 18, Chapter 11, of the United States Code. Many of those provisions touch upon very specialized situations. For example, 18 U.S.C. 224 deals with bribery in sporting contests. And 18 U.S.C. 226 treats bribery affecting port security. Whether under New Jersey law or federal law, the consequences of offering a bribe, or accepting a bribe, 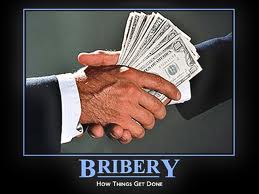 if convicted, are severe.

The New Jersey statute that defines commercial bribes is N.J.S. 2C:21-10. Commercial bribes require that the person soliciting, receiving, or agreeing to receive the benefit have any of numerous specified positions. Those specific positions are:

Bribes in Official and Political Matters:

The New Jersey statute that defines bribery in official and political matters is N.J.S. 2C:27-2. Like commerical bribery, political and official bribery covers both the person providing (or offering to provide) the benefit as well as the person receiving (or offering to receive) the benefit. Measurement of the seriousness of the offense differs. Official or political bribery is a crime of the second degree unless the value of the benefit at issue is $200.00 or less. Where the value does not reach the $200.00 mark, bribery is a crime of the third degree.

As with commercial bribery, bribery in official and political matters must fall within particularly described situations. Those situations are: 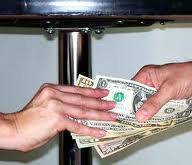 In addition to Chapter 11 bribery, Title 18, Chapter 9 defines bribery when it occurs in the context of bankruptcy proceedings. More particularly, 18 U.S.C. 152(6) makes it a crime to knowingly and fruadulently give, offer, receive, or attempt to obtain money, property, advantage, or promise for acting or forbearing to act in bankruptcy proceedings. Persons convicted of violating 18 U.S.C. 152 are exposed to a term in federal prison of up to five years.

18 U.S.C. 201 is the federal analog of New Jersey's statute relating to bribes in official and political matters. “Public official” is expansively defined to include members of congress, and officers, employees, and persons acting for or on behalf of the United States, or any department, agency or branch of government thereof, in any official function, under or by authority of any such department, agency, or branch of government, and jurors.

Specific bribery provisions included in Chapter 11 are as follows:

And, of course, all of these convictions expose the defendant to stiff monetary penalties.

As indicated above, whether under New Jersey law or federal law, the consequences of offering a bribe, or accepting a bribe, if convicted, are severe. Persons charged, or who may be charged with offenses involving bribes need a skilled and understanding criminal defense firm on their side. Allan Marain has the skill and experience to handle charges involving bribes. He offers an initial no-cost no-obligation consultation. He would welcome the opportunity to review the situation.