New Jersey statutes define eluding at N.J.S. 2C:29-2b. Eluding can happen with a motor vehicle on New Jersey streets or highways. It can also be done in a vessel on New Jersey waters. Eluding consists of fleeing or attempting to flee any police or law enforcement officer after having received a signal from that officer to stop.

Eluding is a third degree crime. However if the flight or attempt to elude creates a risk of death or injury to any person, then it becomes a second degree crime. The statute that defines eluding permits a finder of fact to infer risk of death or injury whenever the conduct in question involves a violation of Chapter Four of the New Jersey Motor Vehicle Code. Chapter Four is the chapter that governs operation of a motor vehicle. It is nearly impossible to

operate a car and not violate some provision of Chapter Four. Literally everyone runs afoul of Chapter Four every time they take the car out of the driveway. For that reason, virtually all eluding incidents can be charged as a second degree crime.

In addition to the normal penalties for a third or second degree crime, the judge is also required to suspend the driver's license of any person found guilty of eluding. This period of suspension must be for a minimum of six months. It can be for as long as twenty-four months. If the person is licensed in a state other than New Jersey, the New Jersey judge cannot suspend the driver's license of that other state. However, the judge will suspend the person's privilege to operate a vehicle in New Jersey for the indicated amount of time. Additionally, the New Jersey court will notify the authorities in the state where the convicted person was licensed. That state can then take its own administrative action 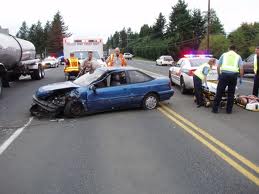 against the driver's license of the convicted person.

If a person succeeds in eluding the officer then, by definition, he has “gotten away,” at least for the moment. All other things being equal, that would make it difficult for the State of New Jersey to prove at a trial who the operator actually was. But the eluding statute rescues the prosecutor. The statute creates a presumption that the owner of the car or vessel in question is the person who eluded the police. Thus if the police succeed in obtaining the registration number, or identifying through other means the vehicle or vessel, they can charge its owner with eluding. The prosecutor may then be able to obtain a conviction even absent other identification of the driver or operator. The owner in this case is found guilty, not on the basis that his vehicle was involved in an eluding incident but, rather, because, his ownership of the vehicle permits a finder of fact to presume that, because he was the owner, he was also the operator.

An owner who is charged on that basis, of course, is given the opportunity to prove that he was not the operator of the vehicle or vessel. This “opportunity” can require the accused owner to make extremely difficult decisions. These situations arise where the owner was, in fact, not the operator, but knows who the operator was, and that operator was a family member or other person that the owner wishes to not incriminate.

Persons charged with eluding, and persons who may be charged with eluding in New Jersey, urgently need to consult with a lawyer experienced in criminal defense. The person who is arrested for eluding, or who may be charged (even if innocent), should speak with a New Jersey criminal defense lawyer. He should see a New Jersey criminal lawyer before saying anything to the police, or to anyone else. Their New Jersey driver's license, their reputation, their ability to earn a living and care for their family and, quite possibly, their freedom, is at stake.