Miranda warnings consist of the following:

Unless police administer Miranda warnings when required to do so, subsequent answers to questions become inadmissible in the State's case-in-chief. That is the only “penalty” the State incurs in failing to administer Miranda warnings. On June 23, 2022, the United States Supreme Court held in Vega v. Tekoh that a person whose Miranda rights have been violated cannot even sue the government for losses incurred as a result of those violations. Adding insult to injury, the State is permitted to use at trial information obtained in violation of Miranda in order to rebut contradictory evidence adduced by the defendant. Even when Miranda warnings have not been issued, spontaneous statements by a person in police custody, when not the result of police questioning, are admissible.

The need to provide Miranda warnings arose by decision of the United States Supreme Court in the case of Miranda v. Arizona, 384 U.S. 436 (1966). Law enforcement officials originally were highly critical of the decision. 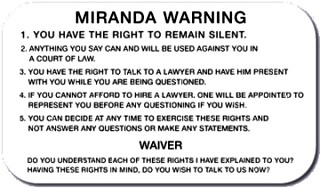 On balance, however, the decision has proved to have greatly benefited law enforcement. This benefit arises from the fact that, once Miranda warnings have been issued, judges are much more likely to rule that defendants' statements were made voluntarily, where the judges might have ruled otherwise absent those warnings. Nevertheless, subsequent decisions of the United States Supreme Court have defined numerous exceptions to the circumstances where Miranda warnings are required:

Ultimate irony: Miranda v. Arizona reversed Ernesto Miranda's conviction for kidnapping, rape, and armed robbery because the police used his statement at trial without providing the warning that the Supreme Court deemed required. His case was returned to the trial court for further proceedings. Arizona retried Miranda. In that new trial, the State did not introduce his statement. The jury convicted Miranda, even without that statement. Miranda served his term of imprisonment and was released on parole. Following release, Miranda was stabbed to death in a barroom brawl. His alleged killer invoked his Miranda right to remain silent, and was never charged.

Needless to say, this page barely scratches the surface concerning the in's and out's of law relating to Miranda warnings.

Admissibility of statements taken from defendants involves intense analysis of the circumstances under which the statement was taken, and of the applicable law. Allan Marain is a New Jersey criminal defense lawyer. For forty-five years, he has been making those analyses on behalf of his clients. He is available to provide to New Jersey defendants the benefits of his experience.