Perjury consists of making a false statement under oath in an official proceeding. The New Jersey Code of Criminal Justice deals with NJ perjury in N.J.S. 2C:28-1. The United States Code deals with federal perjury charges in Title 18, Chapter 79. The two federal provisions of especial relevance are 18 U.S.C. 1621, and 18 U.S.C. 1623.

On this page, we examine both New Jersey perjury and federal perjury. We look more closely at what constitutes perjury, and some nuances of perjury law. We also look at “false swearing,” a New Jersey crime related to perjury.

As indicated above, under the New Jersey Code of Criminal Justice, perjury consists of making 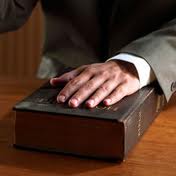 a false statement in an official proceeding. The statement must be made under oath. Beyond being false, the person making the statement must actually believe that it is false. Merely being mistaken does not rise to the level of perjury.

New Jersey provides a limited opportunity for “cure.” That is, the person who committed perjury can “'fess up” and thereby avoid conviction. However, the individual must retract the falsity before the matter in which the perjury occurred concludes. Further, the retraction is effective only if no party to the proceeding suffered irreparable harm. As with perjury, false swearing can also be “retracted.” To be effective, the retraction must be made before the conclusion of the proceeding under which the false statement is made.

Under current New Jersey law, convictions for both perjury and false swearing can never be expunged, regardless of how much time has passed following the conviction.

Under 18 U.S.C. 1621, perjury under federal law occurs when a person, having taken an oath before a competent body in which a law of the United States authorizes oaths to be administered, willfully states or subscribes to any material matter which he does not believe to be true. Perjury under this section differs from perjury under New Jersey law in two respects:

You Need a Perjury Lawyer

Criminal Lawyers in New Jersey have successfully represented persons charged with perjury. They understand perjury law, both New Jersey and federal. And they know their way around the courtroom. Persons charged with, or who may be charged with, perjury, should call them for a no-cost no-obligation initial conference. They should speak with a knowledgeable, experienced New Jersey criminal defense lawyer before discussing the matter with any other person.