New Jersey defines terroristic threats at N.J.S. 2C:12-3. That statute specifies two distinct ways in which a person can commit terroristic threats. The first way is to threaten to commit a crime of violence when the threat is made for any of various specific purposes. Those purposes are: Terroristic threats also exist under this first way of N.J.S. 2C:12-3 when any of the above actions is made in reckless disregard of the risk of causing terror or inconvenience. “Terror,” as used here, means the menace or fear of death or serious bodily injury. “Terrorize” means to instill this fear by way of verbal threat. A “crime of violence” must be clearly threatened.

A case that illustrates this is State of New Jersey v. MacIlwraith, 344 N.J. Super. 544, 548 (App. Div. 2001). Robert MacIlwraith was charged with making terroristic threats. His so-called threats arose in the context of accompanying charges of harassment. MacIlwraith was convicted. He appealed.

MacIlwraith argued on appeal that the threat of harassment did not constitute terroristic threats because in New Jersey, simple harassment is not a crime. It is (under the circumstances of that case) only classified as a petty disorderly persons charge. N.J.S. 2C:12-3 requires a predicate “crime”. Because harassment was not a crime, he argued, N.J.S. 2C:12-3 did not prevent its threatening.

The court agreed with MacIlwraith. Although charged with making terroristic threats, he did not threaten to commit any crime. Instead, the only related charges against him were disorderly persons harassment. Proofs of harassment are insufficient to support a New Jersey conviction for terroristic threats.

The second way to commit terroristic threats in New Jersey is to threaten to kill someone. This threat must be for the purpose of putting the threatened individual in imminent fear of death. The threat must be made under circumstances where the victim reasonably believes that the threat will be carried out. This second way is always a third degree crime. To determine if a threat to kill is terroristic in nature, specific conditions must be present. The threat must:
A contextual factor that is not relevant is the actual fear of the victim threatened. A victim's purported bravery or timidity holds no bearing on whether a threat is a terroristic one. This is to ensure objectivity across victims, as someone's emotional reaction (or lack of reaction) to a crime should not negate its criminality.

Courts usually consider both context and objective facts in terroristic threat situations. A New Jersey case that illustrates this in the context of a domestic violence restraining order is Maria Ortiz v. Francisco Ortiz, A-1742-06T31742-06T3 (App. Div., 2007). In Ortiz, a verbal altercation with Maria over pizza caused Francisco to throw a toy into a glass entertainment center, breaking it. When Maria threatened to call the police, Francisco told her that calling the police would cause things to “get worse.” 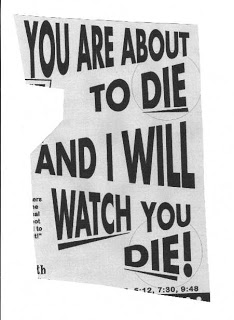 Maria was fearful after Francisco made the threat. She believed she was in danger, especially because of Francisco's breaking the entertainment center. The context in which he made the threat, to Maria, was enough to make her feel terrorized. But Fransisco argued that saying “things are going to get worse” is not a clear terroristic threat.

Although a victim's fear is not relevant to whether a supposed threat is terrorist or not, a history of abuse can be significant in determining if a reasonable person would have believed the threat. In Ortiz, Francisco had no history of violence with Maria, and their situation seemed stable apart from this one incident. Consequently, the objective standard was not met by Francisco's conduct. The “threat” itself was vague and subject to interpretation; and Maria and Francisco had an otherwise largely peaceful relationship. Therefore, the court concluded that Maria had no reason to feel that she was in serious, imminent danger, and that Francisco had made no terroristic threat.

As mentioned, Ortiz arose, not in a criminal proceeding but, rather, in the context of Maria seeking a domestic violence restraining order against Francisco. The standard of proof in a New Jersey domestic violence case is only by a preponderance of (i.e. by the greater weight of) the evidence, not proof beyond a reasonable doubt, as required in criminal prosecutions. Here, Maria could not establish terroristic threats even under that lowered standard of proof. Thus the proofs in her situation came far far below those needed to succeed in a criminal prosecution.

A case with an opposite outcome as Ortiz was State of New Jersey v. Nolan, 205 N.J. Super. 1 (App. Div., 1985). In Nolan, a man was charged with terroristic threats after threatening to kill his brother during an altercation, while reaching for a machete. Nolan argued that his brother did not actually take his threats seriously, and he was not in fear of death.

The courts rejected his argument. Just as a victim's fear cannot justify a conviction, neither can a victim's lack of fear justify an acquittal. The “ordinary person, reasonable fear” standard applies to all terroristic threat cases. Nolan's brother may not have been fearful, but an ordinary person in his situation reasonably would have been. The appellate court affirmed Nolan's guilty verdict of making a terroristic threat.

Allan Marain and Norman Epting, Jr. are New Jersey criminal defense lawyers. They have, between them, over sixty-five years experience. Each has successfully represented persons charged with terroristic threats. Each is available to review your specific charge or charges in a no-obligation conference. Each would welcome your call.